DBM has been providing public relations and public affairs services in the Czech Republic and Slovakia since 1991. Over two hundred major Czech, Slovak and multinational companies have been served by the Prague-based PR agency since.

Creative approach based on ethical principles and truthful facts is the key to business success of our clients. The agency uses a wide range of PR tools from press releases to modern marketing solutions represented by digital communications or integrated social media campaigns.

DBM’s scope of services covers, but is not limited to strategic communications consulting, crisis and reputation management, communications surveys, media training, press office services including print and electronic media monitoring and analysis as well as reputation building services for corporations and individuals.

Crisis communications in the first place 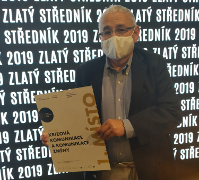 Czech PR's Club contest Zlatý středník (Golden semicolon) Awards honors outstanding campaigns and projects in the field of PR and communications in the Czech Republic and Slovakia. The 18th Gala took place in the Empire Hall of Slovanský dům in Prague yesterday. Our agency placed first in the "Crisis Communication and Communication of Change" with Demolishion is Nonsense (Bourat je nesmysl) category, a project proposed for the DBK shopping mall. It focused on winning public and experts support to rescue the terrace at the DBK shopping center that was originally destined to be torn down. The submission was now recognized for the second time. Last year, the project unfinished yet, was selected top by the Czech PR Association (APRA) Award jury.

Stones of the Disappeared in Prostějov

June 25, 2020 - The laying of the Stones of the Disappeared in Prostějov was an important reminder of the assassination of the local Jewish community during the Nazi occupation, but also an opportunity to support the rehabitation project of the old Jewish cemetery, which also became one of the victims of the Holocaust during the war. At the event, we represented the Kolel Damesek Eliezer Foundation, which, together with the city management and the Hanácký Jeruzalém association, advocates a dignified arrangement of the last resting place of two thousand inhabitants of Prostějov.